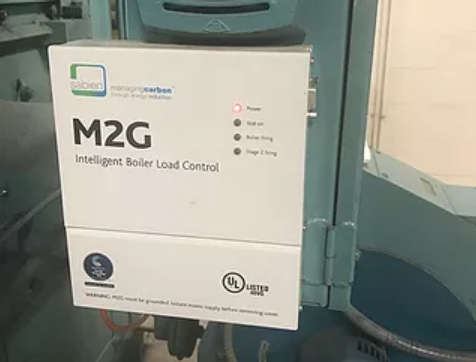 The M2G Advanced Load Monitoring (ALM) intelligent Boiler Controller optimizes the heating efficiency of hot water boilers. A unit attached to each boiler monitors the temperature of the water in the flow and return every 10 seconds and the information is recorded and analyzed by the M2G’s microprocessor.

The M2G addresses the inherent oversizing of a boiler that is designed for the very coldest day of the year. Because of this oversizing, even on very cold days, once the boiler comes up to temperature in the morning and the building is occupied, the boiler continues to fire to satisfy the distribution loop temperatures even though there is no load on the building.  The boiler cycles on and off continually to satisfy these calls for heat. This short cycling of the boiler can be extremely detrimental to the lifespan and the functionality of the boiler. The following is a direct quote from boiler manufacturer Patterson Kelly.

“The effect comes from rapid cycling on boiler components. Gas valves can see decades of use in a few short months, there also tend to be nuisance shutdowns and unexplained flame failures with flame programmer fault codes that have no easily identifiable cause. If you want to make a 35-year boiler fail in 5 years and drive you nuts in the interim, short cycle it.” – Patterson Kelly

The M2G is designed to eliminate this short cycling. When a loading demand is made, the M2G’s microprocessor automatically checks the rate of decay of the water temperature based on how quickly the water temperature drops and determines whether there is a real demand for heat for the building or if the boiler is simply firing to heat the distribution loop. The result is a reduction in firing of up to 65% and energy savings in the 10%-25%+ range. There is simply nothing like the M2G in the marketplace for the reduction of cycling, or energy and carbon savings in the marketplace.

The M2G system is designed to be used in a wide variety of commercial applications that consume natural gas, LP gas, or fuel oil. The M2G works extremely well with existing Building Management Systems (BMS) and Outdoor Temperature Reset (OTR) controls. As a matter of fact, over 95% or Greffen’s customers have an existing BMS system.

The M2G has been validated by a number of organizations including the Department of Energy, The Gas Technology Institute, Texas A&M’s Energy System Laboratories, and the Internal Revenue Service. The ALM controller is best practices at organizations such as General Motors, Ford Motor Company, JPMorgan Chase, Bell Helicopter and the Internal Revenue Service. With a normal payback of under two years, and the extension of the lifespan of your boilers there is simply no other product like the M2G in the hydronic boiler market.

Will It Work On My Boiler?